Since the referendum result on 23 June 2016, farmers and growers have been wondering what Brexit means for their business. The question has still not been answered, although the picture is starting to emerge as the Government continues its negotiations with the EU, prepares consultation documents, and Ministers make speeches.

Article 50 was triggered on 29 March 2017 which sets the date of the UK’s departure from the EU two years hence: 29 March 2019. ‘Sufficient progress’ was deemed to have been made in December 2017 with regards to Phase 1, which deals with citizens’ rights, the Irish border and the financial settlement. The EU has since agreed the terms of the Brexit transition period although various issues remain to be resolved.

The EU has long held the objective to conclude exit negotiations by November 2018 to begin the ratification process before the UK leaves the EU. This leaves a very a short timescale to agree trade arrangements as well as to deal with outstanding contentious issues including the Irish border and the treatment of Gibraltar.

The majority of the world has signed up to the WTO which specifies that members must offer each other ‘Most Favoured Nation’ (MFN) deals. Members commit not to raise tariffs beyond a certain maximum level, although individual tariffs vary significantly between different sectors and products. Whilst the average MFN tariff on goods levied by the EU is 5.3%, the EU has particularly protectionist policies with regards to agricultural products. Examples are shown in the following bar chart.

Possible effects on farming include:

The Government has recently produced a command paper for consultation titled ‘Health and Harmony: the future for food, farming and the environment in a Green Brexit’. Michael Gove has previously accused the Common Agricultural Policy of being ‘a failure – environmentally damaging and socially unjust’. It is in this context that the command paper aims to shift agricultural policy away from direct payments, and towards a ‘better and richer environment in England’.

The Health and Harmony paper confirms that across all farm types, 61% of farm business income came from direct payments over the period 2014/15 to 2016/17, with grazing livestock and mixed farms most dependent. It further acknowledges that most farms make losses from the agricultural side of their business, where direct payments, diversification and agri-environment schemes are excluded.

For 2018, Basic Payment Scheme (BPS) applications will be as normal. During the transition period, it is expected that BPS will be on the same basis as now, but possibly with some simplifications. From 1 January 2021, we will enter the ‘agricultural transition period’ where the Government is committed to pay the same level of ‘funding’ for the sector until the end of this Parliament (5 May 2022 or sooner). Deductions will apply to area payments in order to ‘support farmers to prepare for change’ and to fund new environment schemes. The command paper considers various options to reduce existing CAP payments during the agricultural transition period. We believe that some form of capping is likely. But whichever option is adopted, the Government ‘envisage that further payment reductions would be applied…until the payments have been phased out completely’.

The Government intends to replace the Common Agricultural Policy with a new system which pays ‘public money for public goods’. A new environmental land management system will be the cornerstone of this policy which could include animal welfare, promoting agricultural productivity, public access and supporting rural and upland resilience.

The Agricultural and Horticultural Development Board (AHDB) has carried out a great deal of research on the possible impact to farms depending on different Brexit scenarios, although admittedly before the Health and Harmony consultation paper was produced. The AHDB has assessed these scenarios against the existing base line of farm business income. Whilst dairy and pig sectors would perform relatively well in any event, the outlook for other sectors is less positive. Other than the ‘evolution’ scenario, where direct payments are maintained at current levels and there is limited change to the existing EU trade relationship, a number of sectors including cereals, lowland sheep and beef will have significantly reduced levels of income. 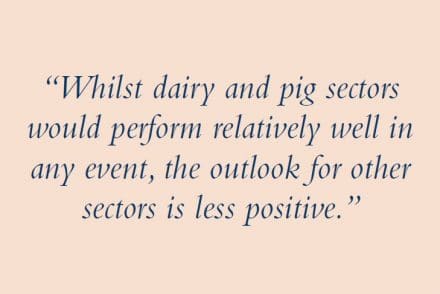 Much depends on the future trading relationship. In the ‘implementation period’ between March 2019 to December 2020, a continuing weak £/€ exchange rate and tariff free access could mean farm profitability will be maintained. In the ‘agricultural transition period’, say from December 2020 to 5 May 2022, support will switch from direct subsidy to environmental support. It remains to be seen how this will play out in the farming sector, but now is not too soon to revisit your farming business plan and to start thinking about how the inevitable loss of direct payments will affect your farming business. Farming has always readily adapted to change and will no doubt do so again this time.

For more information or to speak with a member of our team please contact:

This website uses cookies to improve your experience. We'll assume you're ok with this, but you can opt-out if you wish.
ACCEPT

Any cookies that may not be particularly necessary for the website to function and is used specifically to collect user personal data via analytics, ads, other embedded contents are termed as non-necessary cookies. It is mandatory to procure user consent prior to running these cookies on your website.